Minor Scale on a Guitar

Playing minor scale on a guitar is a basic skill that you need to become a good guitar player.

The minor scale is a common sequence of notes appearing on popular and classical music. The scale is defined typically using as example the A minor scale.

If we start from the note A, the minor scale is given by the following notes:

As you can see, these notes all appear also in the major scale for the key of C.

That’s why we say that A minor is a relative tonality to C major: they have the same notes, differing only where the scale starts.

Intervals in the Minor Scale on a Guitar

Now, considering the intervals of the minor scale, you have the following sequence:

Using the intervals presented above, one can build a minor scale starting on C.

The resulting notes are the following:

To play the minor scale on a guitar, we need to find a shape for the scale.

The following shape can be used, starting on the fifth string: 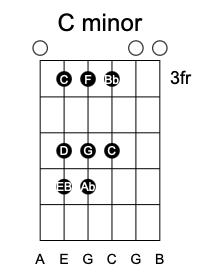 You can also use this shape starting on the 6th string: 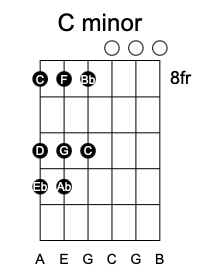 Another position you can use is starting on the 4th string (this time for E minor):

Using these shapes, you can play any minor scale.

Variations of the Minor Scale

Unlike the major scale, the minor scale has variations that many guitar players use.

The main form of the minor scale, seen above, is known as the natural minor.

But there are other two forms of the natural scale: the harmonic minor and the melodic minor.

The harmonic minor is a variation of the natural scale, where one can raise the 7th degree of the scale.

For example, in the C minor scale, the 7th degree is Bb. To make an harmonic minor scale, you need to raise the note Bb to B.

The reason why this is important is that the B note is known as the leading tone. Being half a tone below C, you can easily move from B to C.

The othe reason is that B is the major third of G7. With the B note, we’re now able to use a G7 chord, which is the dominant of C minor.

Without B, you woun’t be able to play a G7 chord, which means that there would not be a dominant chord. This is the reason why this form of the minor scale is called harmonic minor: it helps to improve the harmony.

This means that the notes of the C melodic minor scale are:

Notice that these notes are almost the same as C major key, with the exception of the minor third (Eb instead of E). This makes this scale very useful in certain contexts.

previousGuitar Practice Routine
nextGuitar Intonation: What it is and How to Fix