The G major scale on guitar is one of the most import scales you’ll learn as a guitar player.

First, it is a major scale, which is use in so many songs and other musical pieces.

Also, the G scale is one of the most popular for guitar players and musicians in general.

In this article you will learn about this scale and how to use when playing the guitar.

The G major scale is defined by seven notes that has the tonic in G. The notes of the scale are:

Notice that all notes in this scale are natural, except for F#, which is raised.

This is necessary because, being a major scale, you need to maintain the same intervals from the C major scale.

If you don’t remember this, it is important to observe: the major scale is defined by intervals set by the natural notes, starting in C.

That is, the original major scale in C has the following notes:

These also correspond to the white notes in the piano.

The important thing here is the sequence of intervals. The sequence is:

This means that to get another major scale starting in another note, you need to replicate this interval. This is how it works for G major:

As you see, the sequence of intervals is the same, only changing the notes. This is why we perceive the G major scale as a major scale.

G major on the Guitar

The next step is to learn how to play this G major scale on the guitar.

This can be done using a shape that starts on the third fret, 6th string. Here are the notes: 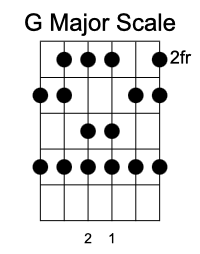 This pattern will let you play the notes in the G major scale starting from G in the 6th string, until the A note of the 1st string.

Other patterns are also possible. For example, here is another common pattern for this major scale, that can be used starting on the 5th fret, 4th string: 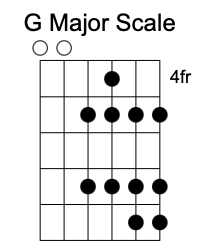 If you want to learn more about guitar scales, you should get our free guitar course  (in PDF format). Topics include:

Click here to get your free course and learn about other guitar scales.