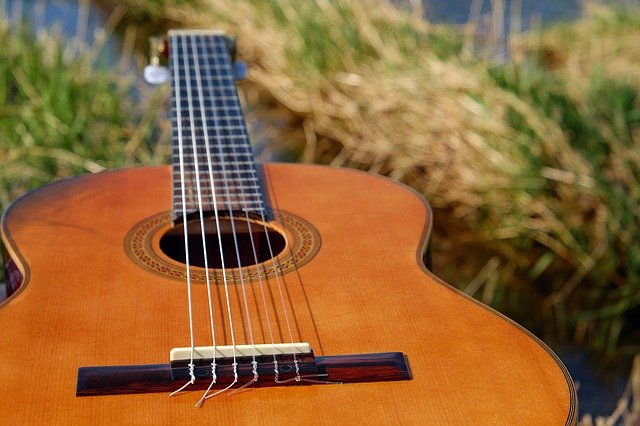 Guitar in spanish is Guitarra. The work is derived from ancient words for string instruments, such as citarra.

The guitar in spanish culture is very important, because it is connected to tradicional songs and dances.

Spain and the History of Guitar

While the guitar is known and played world wide, it was not always like this.

Until the middle ages, there were several kinds of stringed instruments, but they didn’t have the format and sound of the modern guitar.

In the ancient world, there were several simple stringed instruments. The best known is the ancient harp or zither. It is an instrument with several strings attached to a frame.

This evolved to instruments with different shapes that had strings and a resonant cavity. These are the ancestrals of the guitar.

Probably the best known early cousin of the guitar was the lute. This instrument became very popular by the end of the middle ages. Barroque composers such as J.S. Bach wrote many pieces for the lute.

But the lute lost its popularity during the classical music era.

The Guitar from Spain It was in this context that the guitar evolved in Spain. It was initially used for popular songs and music such as flamenco.

Spanish luthiers, starting with Torres, created a modern instrument, nowadays know as the classical guitar. The difference between this and ancient guitars is that it had 6 single strings and a body with an innovative construction. This guitar body projected the sound much better than older instruments.

The Spanish guitar designed by Torres became so popular that other luthiers started to copy his design. In a matter of a few years, most European makers were creating instruments similar to the Torres classical guitar.

The Guitar in Spanish Repertoire

By the same time, classical players saw the potential of the guitar and started to adapt classical music to the new instrument.

Virtuose players such as Fernando Sor and Dionisio Aguado were already creating classical music for the guitar. When Torres created his instrument, this classical music became standar part of the guitar repertoire.

Therefore, Spain had large influence in the modern guitar. This influence was both in terms of inovating the instrument, as well as in terms of creating a repertoire.

Learn More About Guitar in Spanish

If you want to learn more about the guitar, you can check a free guitar course that is now available. In this course you’ll learn:

Click here now to get a free copy (PDF) of this guitar course, which will be sent to your email.